The United Nations Under-Secretary-General for Field Support Atul Khare concluded a three-day visit to Somalia during which he acknowledged the tremendous progress the country has made. Appointed to the office on 1st March 2015, this was the USG’s inaugural visit to Somalia, which he chose as the first destination for his field activities. His engagements were productive and gave him better understanding of the tremendous work the various UN agencies are undertaking in Somalia.

USG Khare was accompanied by Amadu Kamara, Director of UNSOA during the visit. He addressed a town hall meeting with UN staff. The USG also met and had a meeting with Somali President Hassan Sheikh Mohamoud in Mogadishu.

“I had very good meetings with the President, with the Prime Minister of the Federal Government, with the Honorable Speaker of the Federal Parliament, and also the Presidents of the Interim Regional Administrations of Puntland, South West Administration and also the Jubba Administration. And all these meetings, with the SRSG Mr. Nicholas Kay, the SRCC Ambassador Maman (Sidikou), the Force Commander of AMISOM and the Police Commissioner, have given me great confidence in the work that all of the courageous people of UNSOA, UNSOM and AMISOM are together trying to achieve,” he said.

The USG’s visit to Somalia particularly came at a very sensitive time for the UN staff, just days after an attack on colleagues in Garowe, Puntland. He visited the scene of attack, held town halls meetings with staff, sought to understand their issues and assure them of the commitment by the United Nations leadership towards ensuring their safety.

“I feel truly humbled standing here in front of the memorial and the six trees we have planted to honor the ultimate sacrifice paid by six of our colleagues, the two national security guards and the four colleagues, in the cause of bringing hope to the future generation of Somalia,” he said, adding, “My message is clear. I think their ultimate sacrifice encourages me to do even more for the people of Somalia so that their sacrifice will not go in vain. Their sacrifice will be crowned with success as this country achieves peace and security, as this country achieves progress and development, and as this country strengthens democracy. I am convinced that the day will soon dawn and I am convinced that that will be the best honor that we will erect a memorial for these colleagues that have paid the ultimate sacrifice in the course of their duty towards the United Nations. Today I planted along with my colleague, the Director of UNSOA, Mr. Amadu Kamara and also the Head of Office here in Garowe, trees to honor the memories of these colleagues. I am sure as these trees grow, so will our hopes and aspirations for the people of Somalia and so will Somalia,” he said after visiting the scene of the attack.

For the USG, the issues that stand out in Somali today are ensuring peace and security, which would provide the foundation for the social-economic life and political activity to thrive. This, he however emphasized can only have long lasting impact if the Somali people and institutions are empowered to lead and sustain the effort.

“We are a transitory solution, and therefore the development of Somali National Army, the development and the strengthening of the Somali Police Forces, the strengthening of the capacity of the civil administrations, civil service of Somalia is very critical for the Somali people to succeed. And I would recommend that while we look at enhancing the work of AMISOM, enhancing the support provided by UNSOA, we also look at how to help the people of Somalia get a better administration, better institutions which can ensure complete stability after the eventual completion of the work of the international community here,” he stated.

The Department of Field Support ensures the effectiveness of peacekeeping and political missions through provision of logistical and other support including people, equipment, finance and resources. In Somalia, this is done through the United Nations Support Office for AMISOM (UNSOA). 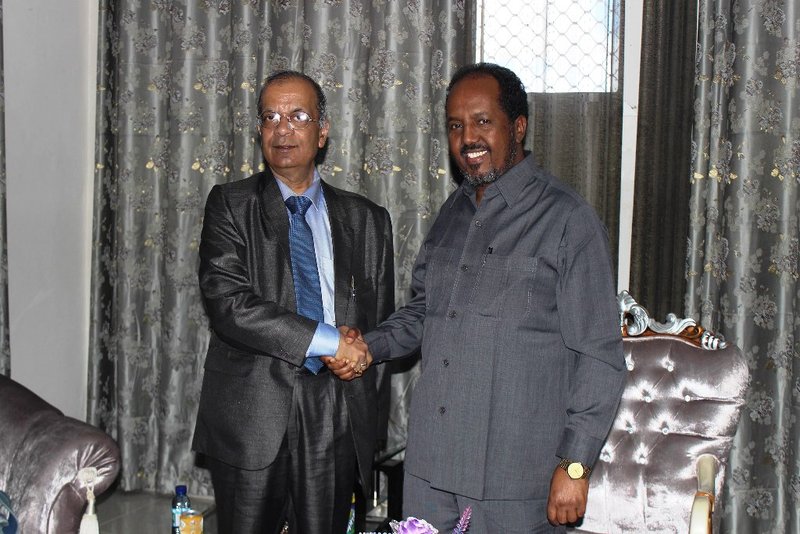 The United Nations Under-Secretary-General for the Department of Field Support, Atul Khare, greets Somali President Hassan Sheik Mohamud during a visit to Garowe, Somalia on May 01, 2015 UN Photo 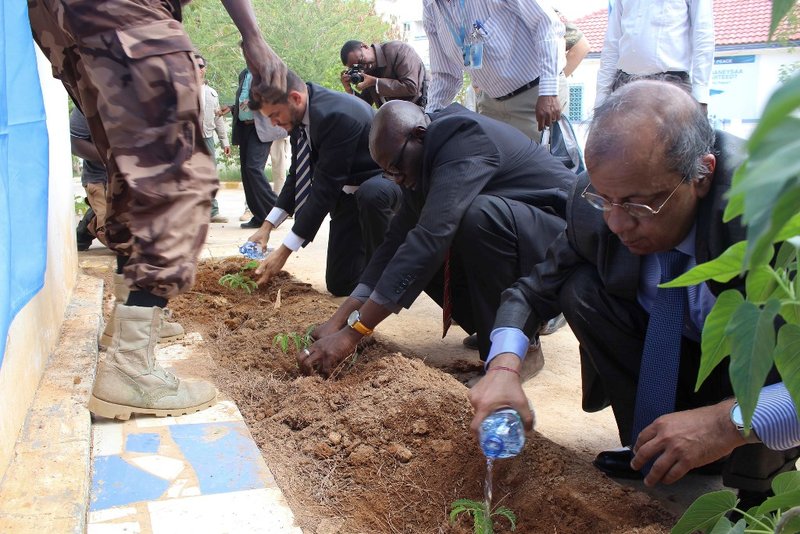 The United Nations Under-Secretary-General for the Department of Field Support, Atul Khare, with Amadu Kamara, UNSOA Director are joined by other UN officials to plant trees, in memory of the UN Personnel killed in Garowe during an attack in April 2015. UN Photo