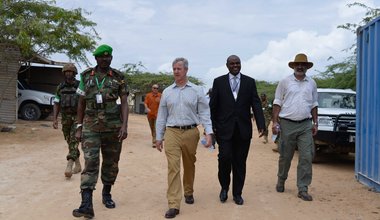 Speaking during the visit, UN Assistant Secretary-General for Field Support Mr. Anthony Banbury applauded the notable progress being made in the country on the political, economic and social fronts.

“It is so great to come back and see the tremendous progress that has been made by the Somali government, the Somali people, with the support of their partners. The United Nations is playing an invaluable role, an absolutely critical role and you can see that clearly. Today the National Consultative Forum of all the Somali stakeholders involved in the political process was able to take place with great support by UNSOM and UNSOA working very well in support of UNSOM, as well as our partners from the African Union, AMISOM,” said Mr. Banbury.

He further acknowledged the tremendous contribution by the various agencies of the United Nations towards the re-construction of Somalia, pledging the continued support of the UN to Somalia as the country continues on a political journey, with general elections expected in 2016.

“It’s just great to see the different parts of the international community; the African Union, the political mission of the United Nations, the UN agencies, working to help the government and people of Somalia as they go down their path of political, economic, social development. Things are on the right track. Unfortunately, there are some real difficult challenges ahead and the Somali people and government should know that the United Nations will stand in partnership with them during this path,” he stated.

Ms. Bettina Tucci Bartsiotas, the UN Assistant Secretary-General, Controller said the visit has been enriching and applauded the various agencies working to facilitate an enabling environment for the reconstruction of Somalia. 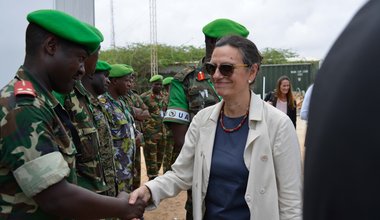 “This has been a great opportunity for me to come from New York and visit Somalia at a crucial time in the history of the country and also of the UN intervention and contribution towards this nation. I have met with all the different forces that are here to create the space so that the political life of the country can get on its feet, as well as the economic life. I am happy that the international community and the United Nations are playing an important role. It’s been a very good experience to see first-hand, how the UN can make an impact on the life of countries and the lives of people that inhabit those countries,” she said.

Mr. Amadu Kamara, Director of the United Nations Support Office for AMISOM (UNSOA) said the visit has been fruitful, enabling demonstration of the key role the UN is playing in Somalia and the meaningful partnerships enabling the notable change in the country.

“We were able to demonstrate to both the Assistant Secretary-General DFS, as well as the Controller, to show some of the challenges that we face in the mission and some of the successes. We went to the National Consultative Forum that was held by UNSOM with all the political partners all over Somalia, and to see how we are working together with AMISOM to provide security; UNSOM taking substantive lead with logistical support from UNSOA able to put up a very high level event, in a very conducive way”.